Kanye is my hero!

He took the words right out of my mouth! On Friday night, Kanye West surprised the millions of viewers who

tuned in to "A Concert for Hurricane Relief" which aired live on the networks of NBC. While joined onstage with actor Mike Myers, Kanye refused to read the teleprompter and expressed his unadulterated disgust for the way the media has poorly portrayed the black people in New Orleans. He stated, "I hate the way we are portrayed in the media. If you see a black family, it says they're looting. See a white family, they are looking for food". Kanye was refering to the this caption: 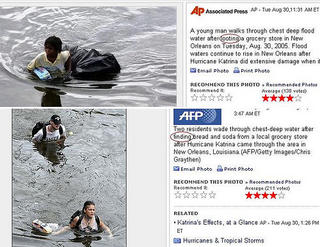 He lashed out against President George W. Bush and the government for racism against African-American survivors of Hurricane Katrina by stating: "George Bush doesn't care about black people". Kanye suggested that the delays in getting relief to the people of New Orleans was delibrate and that America was set up to help black people and the less fortunate as slow as possible.
Share