Bravo's "The Fashion Show": Why can't these people sew??? 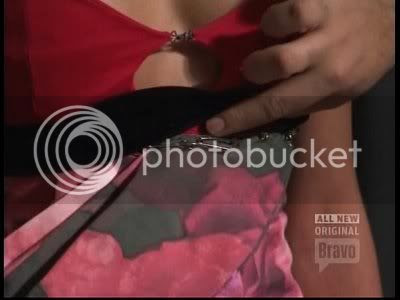 image source
So... what's really the deal with these contestants on "The Fashion Show"? I've watched the first two episodes and you know what? I am not impressed... AT ALL!

See the above picture. Can you BELIEVE that someone actually sent that crap down the runway?! Yes, you are seeing correctly. Those are indeed safety pins. This get up was "constructed" (snicker, snicker) by Johnny. Isaac was completely flabbergasted that he would send his garment down the runway with safety pins in the center front. Kelly wanted to know "why" and Fern simply thought it was "a mess". Johnny's "reasoning" behind this was that he is not a very good sewer and when he came on the show, he thought it was going to be about design. He stated that he is NOT a seamstress and he didn't think the show was going to be "America's Next Best Seamstress"! ROFL Fern Mallis said that if he wants to be a designer, he's going to have to learn the craft! Isaac made the analogy that you can't write recipes if you don't know how to cook!

That said it all!

And no, he was not sent home.

I've seen people that have design aspirations and they make lovely, lovely sketches. BUT, if you don't actually know how clothing is constructed and how to sew, can you be a great designer?

Are you watching the show? If so, what do you think?
Share