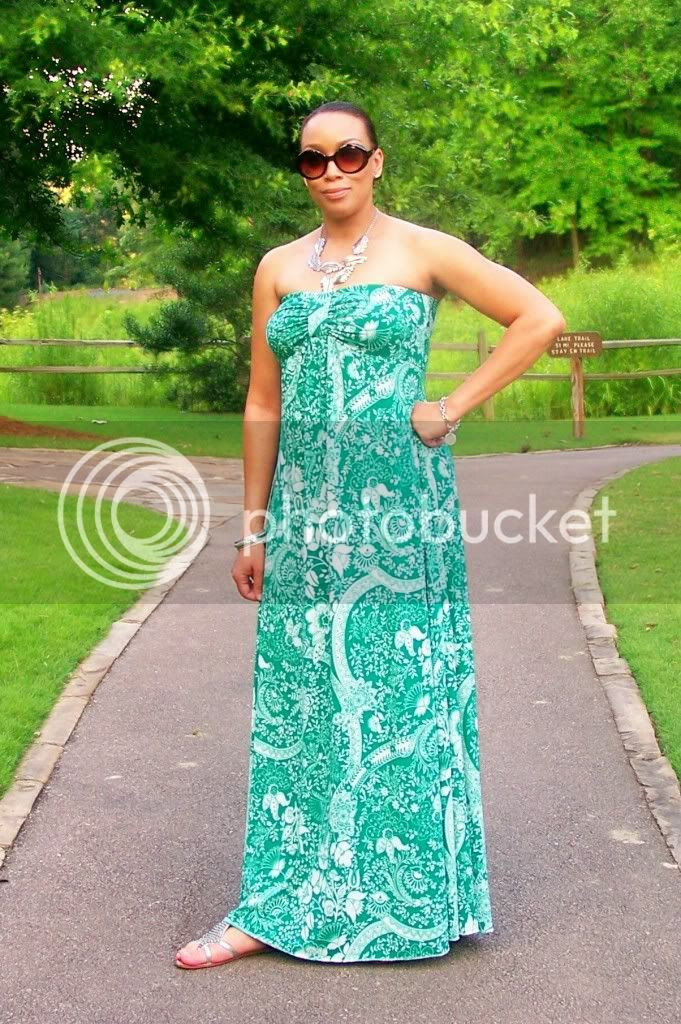 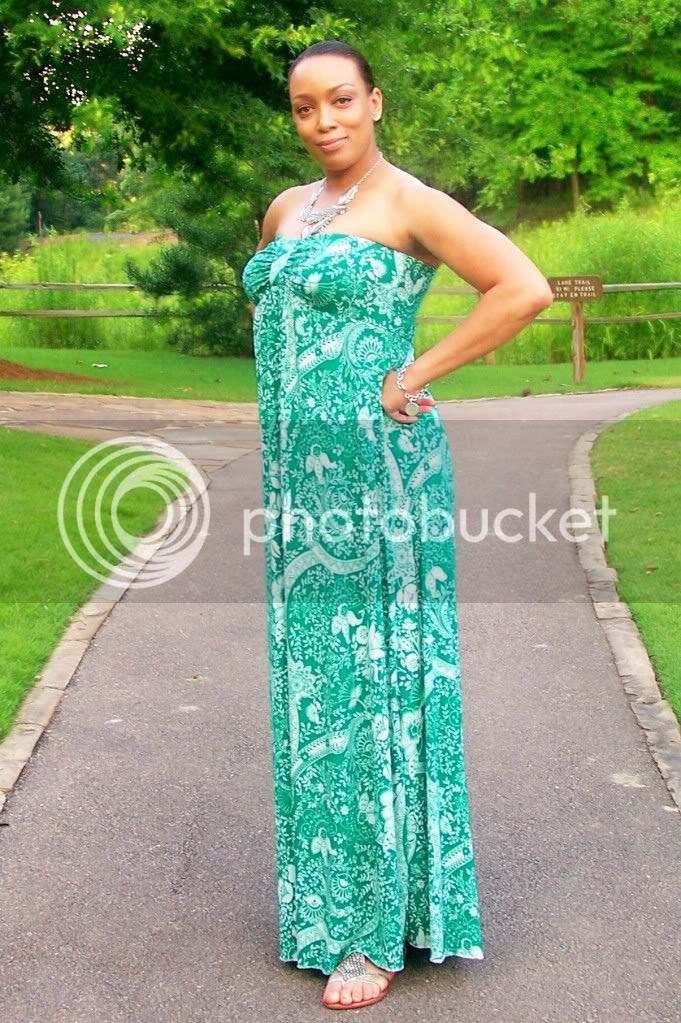 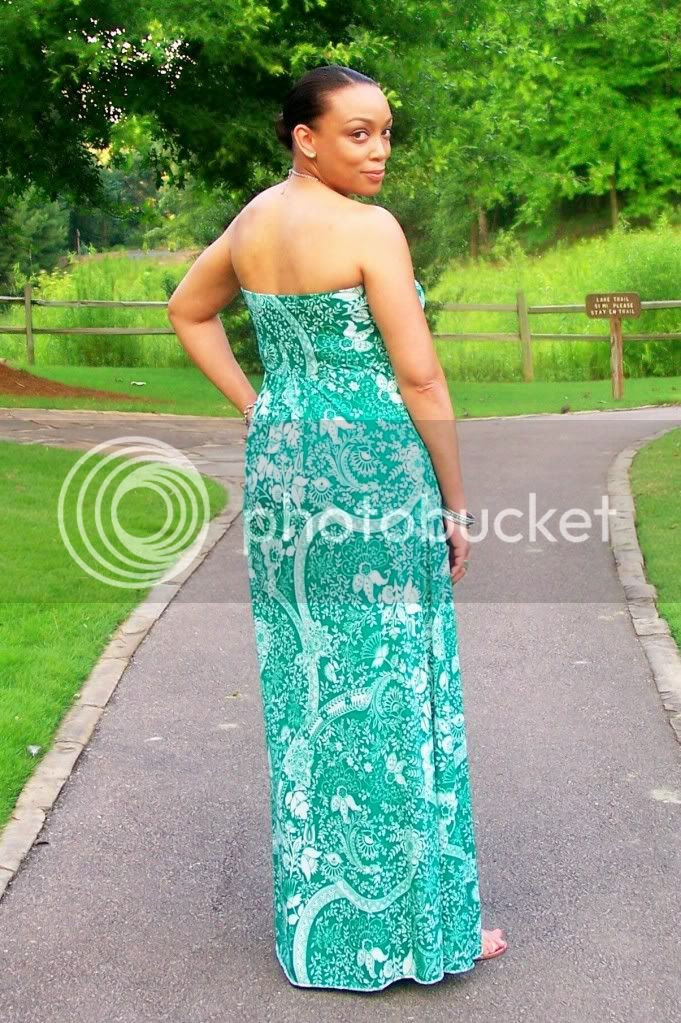 Did it look like the photo/drawing on the pattern envelope once you were done sewing with it? Yep... just on an adult body, LOL.

Fabric Used: I used a poly/lycra knit. I was unsure about the poly, but it was so lightweight and it draped so beautifully when I unrolled the bolt, that I had to have it. Plus, it was on the clearance table and you know I'm a sucker for a sale!

Were the instructions easy to follow? I only used them for the bodice/lining piece. The lower section was pretty self-explanatory.

What did you particularly like or dislike about the pattern? The good: I am so hooked on maxi dresses right now and I wanted a strapless one. I just happened to have been flipping through the Simplicity book during the last .99 cent sale and saw this one. I had never attempted to make a junior sized pattern before, so I was leery of the sizing.

The bad: The bodice piece was cut so narrow. I didn't make a muslin (I'm going to learn one of these days)... I *attempted* a 1" FBA. It failed miserably. I didn't find this out until I had sewn it to the bottom and tried it on. The empire waist seam landed across the center of my bust. It looked horrendous! It looked like ill-fitting RTW. This dress almost became a wadder as I balled it up and threw it at my cutting table.

Pattern Alterations or any design changes you made: After a couple of hours and a glass of wine (LOL), I tried it back on to see exactly where I went wrong. I saw that I only needed to add 2" to the front and back pattern pieces and re-cut. Good thing I ALWAYS buy extra fabric. Here is what the pattern pieces looked like after I altered them: FRONT, BACK & LINING. I also lengthened the bottom pieces by three inches.

Instead of using tricot, I wanted something that would offer the same amount of stretch as the fabric. I used a nude colored swimsuit lining knit.

ETA: I did NOT follow the instructions for the required amount of elastic. Instead, I just measured the elastic around me until I felt it was tight enough, and cut there. It was significantly less than what the pattern said to cut. This is important because I'm sure you would want to feel secure, especially in a strapless dress. 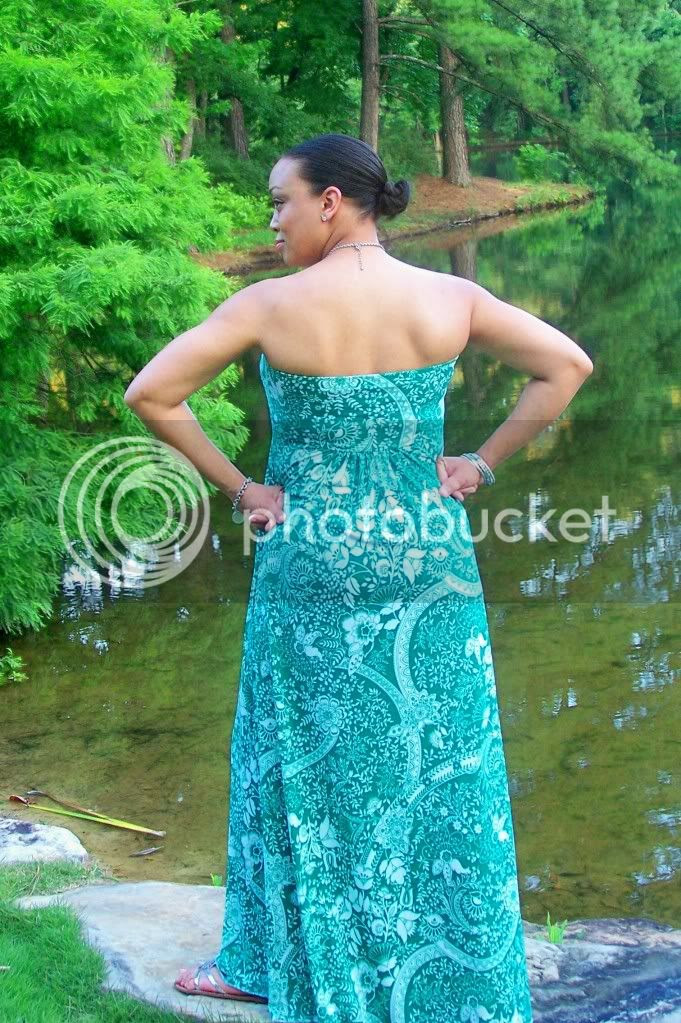 Would you sew it again? Would you recommend it to others? Nope... I will not sew this again... it's just to many other patterns I want to sew. But I do recommend. Also, if you're more than a B cup, be sure to watch the size of the bodice.
Share